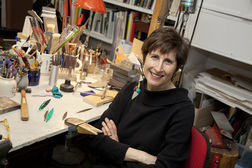 Lisa Vershbow is an American jewelry designer recently relocated to Philadelphia. For almost 40 years she moved between Washington DC and life abroad with her diplomat husband, always setting up a studio wherever posted.  Until the summer of 2020, she shared a studio with colleagues in the Torpedo Factory Art Center in Alexandria, Virginia. She was one of the founding members of the Washington Guild of Goldsmiths and served as its president from 1994 to 1996.  She is also a member of the Society of North American Goldsmiths.

During her most active years abroad, from 1998 to 2016 -- first in Brussels, then Moscow, Seoul and back in Brussels -- she participated in many group exhibitions, had solo shows, lectured in art colleges and helped to bring fellow American artists abroad to exhibit through the State Department's Art in Embassies Program.

Exhibition highlights include: Close Encounters in Galerija ARgentuTum, Vilnius, Lithuania in 2016, the International, Art Jewelry Fair, Sieraad, in Amsterdam in 2014 and 2015.  Paper Dresses Adorned, featuring two-dimensional life-sized paper dresses adorned with jewelry, in Ars Libri in Boston 2013.  One of the paper dresses is now in the collection of the Museum of Fine Arts in Boston.  She has also exhibited in; “Flights of Fantasy – 4 American Craft Artists from the Art in Embassy’s program” at Seoul National University (2007), “Four Years in Russia,” at the Joslyn Museum in Omaha,Nebraska (2005), the Russian-American contemporary jewelry exhibition “Two Capitals” in Moscow (2004),  and the international group exhibition “Jewelry Avant Garde” (2002) at the State Hermitage Museum in St. Petersburg.  In 1999 she participated in the 11th Annual Jewelry Symposium and Exhibition in Turnov, Czech Republic.

Lisa received the 2005 “Avis Bohlen Award” of the American Foreign Service Association for public diplomacy in the arts while in Russia.  She has an honorary degree from the Russian Academy of Arts and membership in the Korean Society of Crafts.   She has been a participant in Art in Embassies collections in Brussels, Seoul and Sofia.  Publications include a profile in Ornament Magazine, 2011, Read My Pins, The Madeleine Albright Collection (2009), and Art Jewelry Today (vols. 2 and 3, 2008 and 2011).  Lisa received a Bachelor of Arts degree in art and art history in 1975 from Connecticut College.